As of 2018-09-02, the blue fullscreen button inside the Unity WebGL player seems to fail in Chrome for some people. If that happens try running the game on Firefox on Edge (or something else I guess!)

Controls are given in the game, but basically they involve dragging lines with the left mouse button and tapping the right mouse button. R will reset a level and Space will start/stop the 'machine'.

Your game will not be saved if you leave the page, so if you like the game, you can just download it from the "full" (non-web) game page linked below.

GAMEPLAY (copied and edited from the full game page: https://foggy-cornslakes.itch.io/the-power-of-45-brains )

This is a puzzle game about creating computational networks that perform simple tasks.

On the left-hand side of the screen, you'll see two bars, one contains an input sequence, and one a desired output sequence. The input is produced by the grey hexagon in the top right corner of the screen. You have to receive the input, manipulate it, and output it to the output sensor, in the lower left corner.

Do that by connnecting "brains" to each other and to the input and output modules. Connections can be formed by right clicking and dragging between two brains.

After you are satisfied with the connections you've formed, press play, and watch your network process the input. You can slowdown or speedup the playback using the slider in the bottom right corner.

Note that the inputs and outputs are not exactly a 1-for-1 match. Some levels will require you to discard/filter some inputs, and some will even require you to output more signals than you were given.

The basic brain component takes in set of X color signals, and returns either a new signal of their color, if it's homogeneous, or nothing at all, if it's not. All other brains are small variants on this brain, and the Input and Output boxes function similarly.

As the game progresses, you'll be presented with other brains, that do different operations on the input they receive.

Some levels are very hard. We tried to create a difficulty progression, but it's hard to expect which levels are intuitive to solve or are not. If you want to skip a level, you can press N, or go to the level selection menu and choose it. 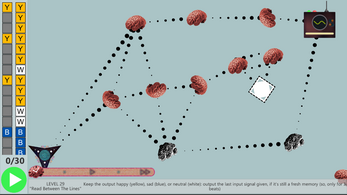